ISPR in association with Delirium Productions and FWO produces a documentary film Where Men and Mountains Meet to showcase the construction and completion of the project.

The documentary is a testament to unprecedented sacrifices by FWO in particular and the Pakistani nation in general.

According to details, the film will showcase Karakoram Highway (KKH), a mammoth project of 1300 km, which is often regarded as the 8th wonder of the world. KKH is an emblem of Pak-China friendship also known as the “Friendship Highway”.

The premiere was arranged on 27 Dec 2021 at The Arena, Bahria Town, Ph-IV RWP where maximum media platforms were invited. The documentary is a testament to numerous sacrifices (813 individuals have embraced martyrdom including 567 military and 246 civilians) for seeing the construction of Highway possible.

It is pertinent to note that the Karakoram Highway, also known as National Highway 35 is a 1,300 km (810 mi) national highway that extends from Hasan Abdal in the Punjab province of Pakistan to the Khunjerab Pass in Gilgit-Baltistan, where it crosses into China and becomes China National Highway 314.

A project which is often regarded as the 8th wonder of the world is the emblem of Pak-China friendship and is also known as Friendship Highway. The highway is one of the highest paved roads in the world, passing through the Karakoram mountain range at a maximum elevation of 4,714 m (15,466 ft) near Khunjerab Pass.

It was started in 1959 and was completed and opened to the public in 1979. On the Pakistani side, the road was constructed by FWO (Frontier Works Organisation), employing the Pakistan Army Corps of Engineers. Karakoram Highway provides the pathway to expeditions for almost all peaks in Gilgit–Baltistan, Kashmir and several peaks in Xinjiang China. The region includes some of the world’s largest glaciers like the Baltoro and Siachen Glaciers.

This herculean task has witnessed numerous sacrifices so much so that a famous proverb “A life lost every kilometer of the road” came into being. 567 Military troops (including 11 Officers) and 246 Civilians lost their lives and more than 980 individuals injured mostly in landslides and falls while building the highway.

Experiences of the following officials, who remained part of FWO during different eras of construction of KKH have also been included in the documentary:

Federal Minister of Communication and Postal Services Murad Saeed also took to his Twitter to laud the initiative of documenting the historic construction of Karakoram Highway.

Similarly, Federal Minister for Information and Broadcasting Chaudhry Fawad Hussain also took to his Twitter to appreciate the ISPR’s project. 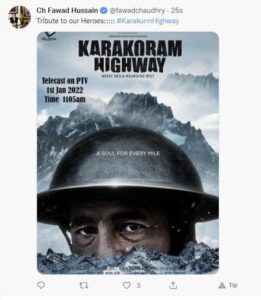 Daraz reveals its plans for Pakistan in 2022