Pakistan Software Houses Association (P@SHA) has published a report titled “P@SHA Salary Survey Report 2021” which ranks universities in Pakistan based on research, number of employees, and higher average salaries. The survey features data from 175 companies and over 30,000 employees.

However, despite being exhaustive there were quite a few mistakes in the report and some important questions were raised on the ranking methodology of the report by academic experts.

The rankings are based on three criteria, which are a preference for a higher salary. preference for innovation and research, and the number of employees.

These rankings are based on the data collected for the P@SHA Salary Survey 2021. The participating 175 companies were asked to rank a list of 38 universities during the survey.

It must be noted here that most of the surveyed companies are IT-related, therefore the rankings and the data are relevant to people related to this field.

Here are the top universities in Pakistan according to P@sha based on the above-mentioned three factors.

This list included company responses on the perceived quality of the universities and consideration for higher salaries compared to the national benchmark.

Companies were also asked about universities that are considered to be among the top 10 in terms of research and innovation. 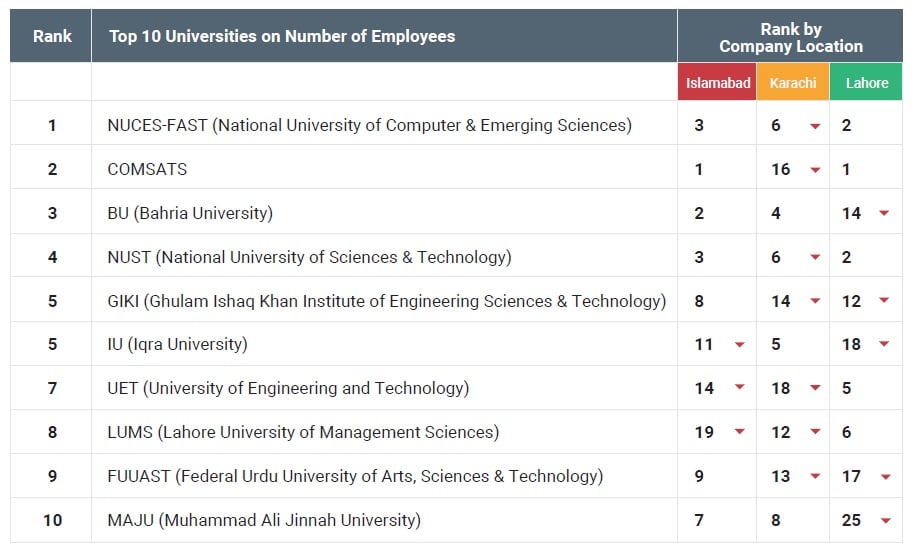 Ghulam Ishaq Institute of Engineering Sciences and Technology (GIKI) has been ranked in the fifth position, however, the university is located in Islamabad, as per the P@SHA report.

Similarly, the 7th-ranked UET Lahore and Taxila have been merged together and yet again, the location of UET Taxila has been listed as Islamabad.

It seems as though the university location has been listed based on the closest metropolitan from among Lahore, Karachi and Islamabad.

MAJU (Mohammad Ali Jinnah University) has been ranked at the number fifteen position. But the researchers at P@SHA need to get updated with the fact that any university by the name of MAJU Islamabad no longer exists and was changed to CUST (Capital University of Science and Technology) in 2015.

The challenge of establishing rule of law

What similarities do Shaheen, Shahid share in these photos?